Powdery mildew is a common disease of cucurbits under field and greenhouse conditions in most areas of the world. Although all cucurbits are susceptible, symptoms are less common on cucumber and melon because many commercial cultivars have resistance. This disease can be a major production problem. Quantity of yield is reduced due to a decrease in the size or number of fruit or a decrease in the length of the harvest period. Premature senescence of infected leaves can result in reduced market quality because fruit become sunburnt or ripen prematurely or incompletely. Such fruit have poor storability (winter squash), low soluble solids with consequent poor flavor (melon), poor rind color (pumpkin), and shriveled, discolored handles (pumpkin). Stress from disease can lead to imperfections on fruit rind such as speckling, raised indentations, and oedema. In addition, powdery mildew infection predisposes plants to other diseases, in particular, gummy stem blight.

Podosphaera xanthii (previously known as Sphaerotheca fuliginea and S. fusca) and Erysiphe cichoracearum are the two most commonly recorded fungi causing cucurbit powdery mildew. E. cichoracearum was considered to be the primary causal organism throughout most of the world before 1958. Today, P. xanthii is found more commonly worldwide. A shift in the predominance of these two fungi may have occurred or the causal organism may have been misidentified. P. xanthii is a more aggressive pathogen than E. cichoracearum. E. cichoracearum may have a lower temperature optimum since this species is found mainly during cooler spring and early summer periods and P. xanthii appears to progress most rapidly during the warmer months. The conidia (spores produced asexually) of E. cichoracearum and P. xanthii are difficult to distinguish and cleistothecia, which are sexual fruiting bodies (structures containing spores produced through sexual reproduction), have been observed less commonly. Consequently, these fungi have been confused. The name of the fungus frequently has been reported without valid confirmation. Criteria for differentiating these fungi using the conidial stage were not identified until the 1960s. The main criterion used is presence of fibrosin bodies in conidia of P. xanthii. Based on these criteria, P. xanthii was found to be the predominant fungus, rather than E. cichoracearum as previously claimed, in several countries. During recent surveys E. cichoracearum was found rarely and only at the start of disease development in New York and other eastern states.

White, powdery fungal growth develops on both leaf surfaces, petioles, and stems. It usually develops first on crown leaves, on shaded lower leaves and on leaf undersurfaces. Yellow spots may form on upper leaf surfaces opposite powdery mildew colonies. Older plants are affected first. Infected leaves usually wither and die. Plants may senesce prematurely. Fruit infection occurs rarely on watermelon and cucumber. Cleistothecia are dark brown, small (diameter of about 0.003 inches) structures that are barely discernable without a hand lens. They develop late in the growing season. The sexual spores within these structures are protected from adverse conditions. 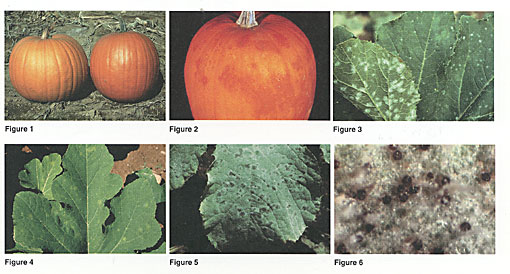 The primary initial inoculum is believed to be airborne conidia dispersed over long distances from places, where cucurbit crops are grown earlier in the year. Conidia remain viable for 7-8 days based on results from laboratory studies. The causal fungi are obligate parasites and therefore cannot survive in the absence of living host plants, except as cleistothecia. Possible local sources of initial inoculum include conidia from greenhouse-grown cucurbits, cleistothecia, and alternate hosts. Cleistothecia have been reported rarely in the United States; however, even when present they can be overlooked. Both mating types required for sexual reproduction have been found throughout the United States, including New York. Although P. xanthii and E. cichoracearum are described as having broad host ranges, strains of these fungi have been shown to be host-specific. The role of non-cucurbit hosts as sources of inoculum has not been investigated. Verbena, a common ornamental plant, could be an important source of inoculum, especially for cucurbits grown as a crop or transplants in the same greenhouse as verbena.

Powdery mildew develops quickly under favorable conditions because the length of time between infection and symptom appearance is usually only 3 to 7 days and a large number of conidia can be produced in a short time. Favorable conditions include dense plant growth and low light intensity. High relative humidity is favorable for infection and conidial survival; however, infection can take place as low as 50% RH.Dryness is favorable for colonization, sporulation, and dispersal. Rain and free moisture on the plant surface are unfavorable. However, disease development occurs in the presence or absence of dew. Mean temperature of 68-80°F (20°C-27°C) is favorable; infection can occur at 50-90°F !0°C-32°C) . Powdery mildew development is arrested when daytime temperatures are at least 100°F (28°C). Plants in the field often do not become affected until after fruit initiation. Susceptibility of leaves is greatest 16 to 23 days after unfolding.

Genetic resistance is used extensively in cucumber and melon, and has been incorporated into most other cucurbit crops. Most resistant squash and pumpkin varieties in the United States contain one or two copies of the same major resistance gene from a wild cucurbit. Genetic of resistance is different in cucumber and melon. Recently a decline in the degree of suppression achievable with resistant varieties has been detected indicating adaptation in Podosphaera xanthii. Successive cucurbit plantings should be physically separated or at least planted up-wind of older plantings because older plants can serve as a source of conidia. Fungicides containing antagonistic fungi for biological control have been developed.

Fungicides should be applied following detection through the DDS. Inspect plants weekly beginning in July and after fruit initiation (when plants become more susceptible). Examine upper and under surfaces of five older leaves at each of 10 sites or until symptoms are found. Initiate a spray program when symptoms are found. A spring planting of summer squash will become infected first; therefore, when available, it can be used as an indicator of when to begin scouting vine crops and later plantings of summer squash.

For a preventive schedule, applications should begin when plants start to run and/or to produce fruit and conditions for infections are favorable. To obtain adequate control, fungicide is needed on the undersurface of leaves and on leaves low in the plant canopy because the fungus develops best on these surfaces. This can be best accomplished by using mobile materials (i.e. quinoxyfen, boscalid, triflumizole). Another approach is to improve efficacy of contact materials (i.e. chlorothalonil, copper) by maximizing spray coverage on undersurfaces of leaves. Air-assist sprayers are one of the most effective means for increasing coverage and deposits on all leaf surfaces. Coverage produced by traditional hydraulic boom sprayers can be increased by either decreasing nozzle spacing (10 inches is better than 20 inches), increasing volume (75 gpa has worked well), increasing pressure (at least 80 psi), or by changing to smaller nozzle tips that direct sprays at an angle to the canopy. Use water sensitive paper to check spray coverage. Refer to the current Cornell Pest Management Guidelines for Commercial Vegetable Production for an updated list of available fungicides and follow label directions.

Development of fungicide resistance and consequent control failure is always a concern with mobile fungicides due to their single site mode of action. Strains of the powdery mildew fungus resistant (insensitive) to such fungicides have been found throughout the United States. Reduced sensitivity to fungicides from several chemical groups have been detected in other areas of the world as well. Therefore, tactics should always be used to minimize the potential of resistant pathogen strains being selected: apply mobile fungicides with contact fungicides, apply them only when needed most to protect yield (which usually is at the start of disease development), use highest labeled rates, and alternate between mobile fungicides with different modes of action as indicated by their FRAC code when possible (triflumizole and myclobutanil have the same mode of action; they are in FRAC group 3). In addition, maximize spray coverage and also use nonchemical control practices. At the start of powdery mildew epidemics, frequency of strains resistant to mobile fungicides usually has been sufficiently low that at least one application of these fungicides has suppressed powdery mildew. This situation could change in the future. The frequency of resistant strains can increase rapidly following treatment.

Several biopesticides approved for organic production are registered for this disease in the United States. These products contain natural ingredients such as botanical oils, bicarbonates, hydrogen dioxide, and lipopeptides. They are contact materials, thus good coverage is critical for effective control. Products evaluated in university trials have exhibited a range in efficacy with some being as effective as conventional contact fungicides.

In FieldClimate.com the risk of Powdery mildew is detected by the sensors: leaf wetness and temperature. Condtions for optimal development of the fungal pathogen are:

Conditions on 20th of July as well as on the beginning of August have been favourable for the fungal pathogen. During these periodes the temperature was between 20°C and 27°C and it was quiet dry (no leaf wetness periodes).